How To Using an Multimeter

Using a multimeter is quite bit difficult for the first time especially the analog type one unlike the digital which is more convenient to use for beginners.
Every multimeter have its own user manual accompanied when you purchased it at any electronics store in your areas, and each one varies on how each circuits designed but there's always only one thing in common,
a Multimeter is is used to measure voltages AC or DC, currents and resistance, continuity and electronics components.

Maybe this only a take brief explanation on how to use a multimeter,
I have an example copy around here using my Sanwa analog multimeter which is made from Japan.

PARTS OF A MULTIMETER 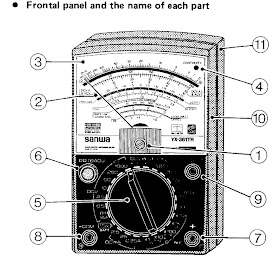 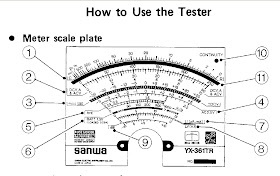 Multimeter with selector set to "Ohms". This meter only has a single Ohms range.Multimeter with selector set to "Ohms". This meter only has a single Ohms range.
Set the multimeter to Ohms or Resistance (turn meter on if it has a separate power switch). Understand that resistance and continuity are opposites. The multimeter measures resistance in ohms, it can not measure continuity. When there is little resistance there is a great deal of continuity. Conversely, when there is a great deal of resistance, there is little continuity. With this in mind, when we measure resistance we can make assumptions about continuity based on the resistance values measured. Observe the meter indication. If the test leads are not in contact with anything, the needle or pointer of an analog meter will be resting at the left most position. This is represents an infinite amount of resistance, or an "open circuit"; it is also safe to say there is the no continuity, or path between the black and red probes. Careful inspection of the dial should reveal the OHM scale. It is usually the top-most scale and has values that are highest on the left of the dial (a sideways "8" for infinity) and gradually reduce to 0 on the right. This is opposite of the other scales; they have the lowest values on the left and increase going right.

Connect the black test lead to the jack marked "Common" or "-"

Connect the red test lead to the jack marked with the Omega (Ohm symbol) or letter "R" near it.

Hold the probes at the end of the test leads together. The meter pointer should move fully to the right. Locate the "Zero Adjust" knob and rotate so that the the meter indicates "0" (or as close to "0" as possible). Note that this position is the "short circuit" or "zero ohms" indication for this R x 1 range of this meter. Always remember to "zero" the meter immediately after changing resistance ranges.

Replace batteries if needed. If unable to obtain a zero ohm indication, this may mean the batteries are weak and should be replaced. Retry the zeroing step above again with fresh batteries.

Measure resistance of something like a known-good lightbulb. Locate the two electrical contact points of the bulb. They will be the threaded base and the center of the bottom of the base. Have a helper hold the bulb by the glass only. Press the black probe against the threaded base and the red probe against the center tab on the bottom of the base. Watch the needle move from resting at the left and move quickly to 0 on the right.

Change the range of the meter to R x 1. Zero the meter again for this range. Repeat the step above. Observe how the meter did not go as far to the right as before. The scale of resistance has been changed so that each number on the R scale can be read directly. In the previous step, each number represented a value that was 100 times greater. Thus, 150 really was 15,000 before. Now, 150 is just 150. Had the R x 10 scale been selected, 150 would have been 1,500. The scale selected is very important for accurate measurements. With this understanding, study the R scale. It is not linear like the other scales. Values at the left side are harder to accurately read than those on the right. Trying to read 5 ohms on the meter while in the R x 100 range would look like 0. It would be much easier at the R x 1 scale instead. This is why when testing resistance, adjust the range so that the readings may be taken from the middle rather than the extreme left or right sides.

Test resistance between hands. Set the meter to the highest R x value possible. Zero the meter. Loosely hold a probe in each hand and read the meter. Squeeze both probes tightly. Notice the resistance is reduced. Let go of the probes and wet your hands. Hold the probes again. Notice that the resistance is lower still. For these reasons, it is very important that the probes not touch anything other than the device under test. A device that has burned out will not show "open" on the meter when testing if your fingers provide an alternate path around the device, like when they are touching the probes. Testing round cartridge type and older style glass automotive fuses will indicate low values of resistance if the fuse is lying on a metal surface when under test. The meter indicates the resistance of the metal surface that the fuse is resting upon (providing an alternate path between the red and black probe around the fuse) instead of trying to determine resistance through the fuse. Every fuse, good or bad, will indicate "good".How to Measure Voltage

Set the meter for the highest range provided for AC Volts. Many times, the voltage to be measured has a value that is unknown. For this reason, the highest range possible is selected so that the meter circuitry and movement will not be damaged by voltage greater than expected. If the meter were set to the 50 volt range and a common U.S. electrical outlet were to be tested, the 120 volts present could irreparably damage the meter. Start high, and work downward to the lowest range that can be safely displayed.

Locate the Voltage scales. There may be several Volt scales with different maximum values. The range chosen the selector knob determines which voltage scale to read. The maximum value scale should coincide with selector knob ranges. The voltage scales, unlike the Ohm scales, are linear. The scale is accurate anywhere along its length. It will of course be much easier accurately reading 24 volts on a 50 volt scale than on a 250 volt scale, where it might look like it is anywhere between 20 and 30 volts.

Test a common electrical outlet. In the U.S. you might expect 120 volts or even 240 volts. In other places, 240 or 380 volts might be expected. Press the black probe into one of the straight slots. It should be possible to let go of the black probe, as the contacts behind the face of the outlet should grip the probe, much like it does when a plug is inserted. Insert the red probe into the other straight slot. The meter should indicate a voltage very close to 120 or 240 volts (depending on type outlet tested). Remove the probes, and rotate the selector knob to the lowest range offered, that is greater than the voltage indicated (120 or 240). Reinsert the probes again as described earlier. The meter may indicate between 110 and as much as 125 volts this time. The range of the meter is important to obtain accurate measurements. If the pointer did not move, it is likely that DC was chosen instead of AC. The AC and DC modes are not compatible. The correct mode MUST be set. If not set correctly, the user would mistakenly believe there was no voltage present. This could be deadly. Be sure to try BOTH modes if the pointer does not move. Set meter to AC volts mode, and try again. Whenever possible, try to connect at least one probe in such a way that it will not be required to hold both while making tests. Some meters have accessories that include alligator clips or other types of clamps that will assist doing this. Minimizing your contact with electrical circuits drastically reduces that chances of sustaining burns or injury.How to Measure Current Amperes

Determine if AC or DC by measuring the voltage of the circuit as outlined above.
Set the meter to the highest AC or DC Amp range supported. If the circuit to be tested is AC but the meter will only measure DC amps (or vice-versa), stop. The meter must be able to measure the same mode (AC or DC) Amps as the voltage in the circuit, otherwise it will indicate 0.

Be aware that most multimeters will only measure extremely small amounts of current, in the uA and mA ranges. 1 uA is .000001 amp and 1 mA is .001 amp. These are values of current that flow only in the most delicate electronic circuits, and are literally thousands (and even millions) of times smaller than values seen in the home and automotive circuits that most homeowners would be interested testing. Just for reference, a typical 100W / 120V light bulb will draw .833 Amps. This amount of current would likely damage the meter beyond repair. A "clamp-on" type ammeter would be ideal for the typical homeowner requirements, and does not require opening the circuit to take measurements (see below). If this meter were to be used to measure current through a 4700 ohm resistor across 9 Volts DC, it would be done as outlined below:

Insert the black probe into the "COM" or "-" jack.

Insert the red probe into the "A" jack.

Shut off power to the circuit.

Open the portion of the circuit that is to be tested (one lead or the other of the resistor). Insert the meter in series with the circuit such that it completes the circuit. An ammeter is placed IN SERIES with the circuit to measure current. It cannot be placed "across" the circuit the way a voltmeter is used (otherwise the meter will probably be damaged). Polarity must be observed. Current flows from the positive side to the negative side. Set the range of current to the highest value.

If you're measuring the current consumed by the device itself, be aware of any filter capacitors or any element that requires an inrush (surge) current when switched on. Even if the operating current is low and within the range of the meter fuse, the surge can be MANY times higher than the operating current (as the empty filter capacitors are almost like a short circuit). Blowing the meter fuse is almost certain if the DUT's (device under test) inrush current is many times higher than the fuses rating. In any case, always use the higher range measurement protected by the higher fuse rating (if your meter has two fuses), or just be careful.

Source By : Google.com and Search engine