Best Android Apps to Change Voice During/Off CallYou may watch some tv programs that the performers imitate the famous singer and use the similar his/her voice to sing a song. I am always surprised by this guys' talent for this imitation. Do you ever want to change your voice(you just need to change to another voice, there is no need to imitate the famous people, you know it takes time.). There are some android apps with such feature help you to change your voice when a call is coming. This will give the caller a surprise or even shock when you want to play a trick.(note:click the blue words to download the app)
1 Simple Voice Changer

Its current voice effects are: Evil, Alien, Chipmunk, Robot, Slow, Helium, Deep, Reverse, Talk into Fan, Robot Mouse and Echo effect. I used it to record(it also gets the record function ) one of my friends' voice and apply its Robot effects, that's really cool. You can share the sounds with friends via e-mail/instant messenger etc.
2 Funny Call

Now over 2.5 million apps downloaded this app! You can sound like a creepy man, woman, alien, chipmunk, and more during a live call! Lots of crazy and fun voice effects like Alien, Cyborg, Ransom & Echo. Pro-Audio effects transform your voice during the phone call you can check.Funny Call can change voice and works on or off calls.Please note that your voice will sound normal to you but the person you are talking with will hear your voice modified with the effect you applied.
3 Best Voice Changer

You can use this app to record yourself or your voice around you and save recordings as wav files.You can change your speech speed, add background sounds, add effects: CHORUS, ECHO,change your voice to CHIPMUNK, CAT, ROBOT, CHILD, MEGAPHONE, serveral WOMEN's and MEN's voices and more.But this app can not change the voice during a phone call.
4 Ultra Voice Changer 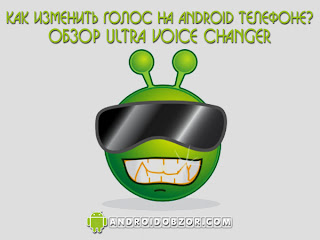 Its includes voice effects: Robot,Alien (Goauld), Alien 2(Asgard),Backwards,Chipmunk, Cyborg 1-2(Daleks),Deep,Freaky 1,Helium(Despicable Minion), Possessed,Echo,Bee,Hyper,Slow Motion. You get a lot choices to change your voice. Record yourself and then change your voice. One user said:Of all the voice changer apps this is the most advanced and straight forward app ever. But you have to try by yourself to know the attractive android app.
source by : http://about-google-android.blogspot.co.uk