Oppo A57 smartphone was launched in November 2016. The phone comes with a 5.20-inch touchscreen display with a resolution of 720 pixels by 1280 pixels.

The Oppo A57 is powered by 1.4GHz octa-core Qualcomm Snapdragon 435 processor and it comes with 3GB of RAM. The phone packs 32GB of internal storage that can be expanded up to 128GB via a microSD card. As far as the cameras are concerned, the Oppo A57 packs a 13-megapixel primary camera on the rear and a 16-megapixel front shooter for selfies. 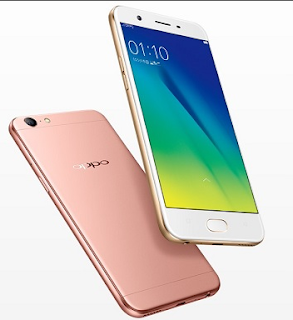 The Oppo A57 is a dual SIM (GSM and GSM) smartphone that accepts Nano-SIM and Nano-SIM. Connectivity options include Wi-Fi, GPS, Bluetooth, 3G and 4G. Sensors on the phone include Compass Magnetometer, Proximity sensor, Accelerometer, Ambient light sensor and Gyroscope.

There has been no further information regarding pricing Oppo A57 in Indonesia. According gsmarena.com, this first smartphone marketed in China at a price of USD $ 231 or equivalent to Rp. 3.1 Millions. It is probable that this smartphone was released in Indonesia, because the previous Oppo Oppo A37 has been released officially in Indonesia. But my friend do not be surprised if the price Oppo A57 a more expensive rate. Because this smartphone has a front camera with higher resolution and more powerful powered kitchen runway.